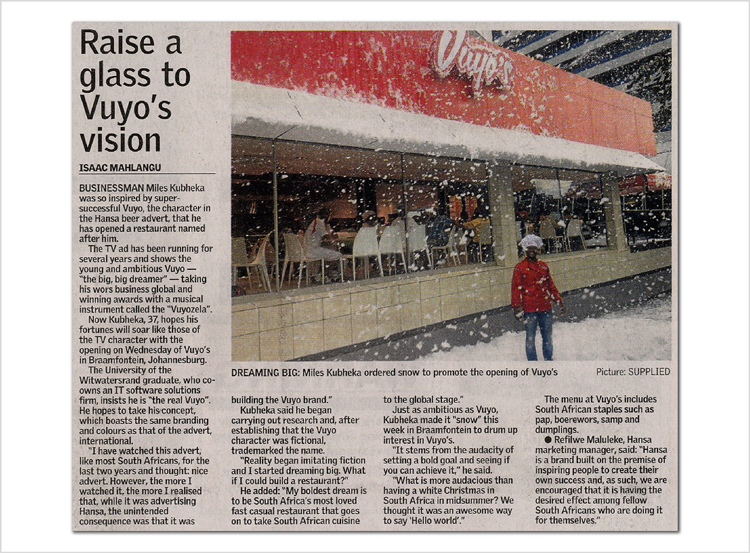 It seems our character, Vuyo, who features in a series of ads for Hansa, has inspired ordinary South Africans to dream big and make things happen.  First a leading South African spice company, Deli Spices, created an actual brand of Boerewors called Vuyo’s Wors.  Then we noticed Vuyo’s Boerewors stands popping up in Port Elizabeth.  An online search revealed Wayne Allen, a Port Elizabeth businessman, is behind this project that he started as a job creation initiative.  He now permanently employs at least ten people.  But the biggest compliment was when we spotted the front page of the Sunday Times a week or two ago. One adoring consumer was so taken with Vuyo’s story, he decided to open a restaurant called Vuyo’s (the first of a chain he hopes to roll out across the country and the globe). See articles below for more.

Here’s to all the Vuyo’s out there.  Keep dreaming beeg. Cheers.

Vuyo, he’s such a big, big dreamer! by LYNNE GADD-CLAXTON

“Vuyo, he’s such a big, big dreamer!” Most know the South African Breweries advert for a popular beer.  A Port Elizabeth business man is also a “big, big dreamer” and creating employment opportunities for unemployed residents.

Wayne Allen, has started Vuyo’s Wors, a job creation project.  The project sees the previously unemployed getting the opportunity to empower themselves. The Coffee Café owner Wayne Allen said, “I want to create jobs, something that is simple to control and establishes pride in the employees.” His initiative has created regular work for ten people. There are currently four Vuyo’s Wors stands located in the Bay region:  Nelson Mandela Metropolitan University’s North Campus taxi rank, Norwich, outside The Herald offices and Russell Road College.  On a Saturday, Govan Mbeki Avenue shoppers can buy a wors roll at twice as many stands situated in the city’s centre. Port Elizabethans can enjoy Vuyo’s Wors’ hotdogs at R5.00 each or a boerwors or russian roll at R12.00 each. Allen admits he found the inspiration for the job creation initiative from the Vuyo adverts.  When he wanted to register the company, he discovered Vuyo’s Wors was registered under Deli Spices. “Deli Spices were very helpful and offered a lot of guidance.  They agreed to let us use their trademarked name,” he said.  The Cape Town based company, Deli Spices supplies the wors also trademarked as Vuyo’s Wors.

The initiative was launched at the Bay’s annual Splash Festival and has been seen at many other locally held events.  Allen said, “We have had requests to be closer to NMMU’s South Campus and would love to have a stand closer for South Campus students.  To get a stand on the beach front has proved to be more difficult.” “The municipality could be more accommodating.  There can be so much red tape when an informal business wants to establish in a particular spot,” he said.  Allen hopes there will be more support from the municipality and government to improve informal employment initiatives such as this one. One of the people employed under the initiative, Mandy Stuurman, a 32-year old mother of four, said she was happy for the opportunity presented to her by Wayne Allen.  She said she is able to assist her husband and can better support their four children. Tinash Chipoi, 21, has been working five months as a Vuyo’s Wors’ employee.  He said, “I love this job.  I get to talk to clients every day and it makes me feel like a celebrity.”

“Mr. Allen has not only provided me with the chance to be able to buy myself what I want but he has given me accommodation,
morning coffee and I can eat as many Vuyo’s Wors’ hotdogs as I like,” Tinash Chipoi added with a big smile on his face. Wayne Allen is finding a solution for the high unemployment rate in South Africa.  He has made the unemployed’s dream of work prospects a reality.

From Better to Best – Vuyo in the news again 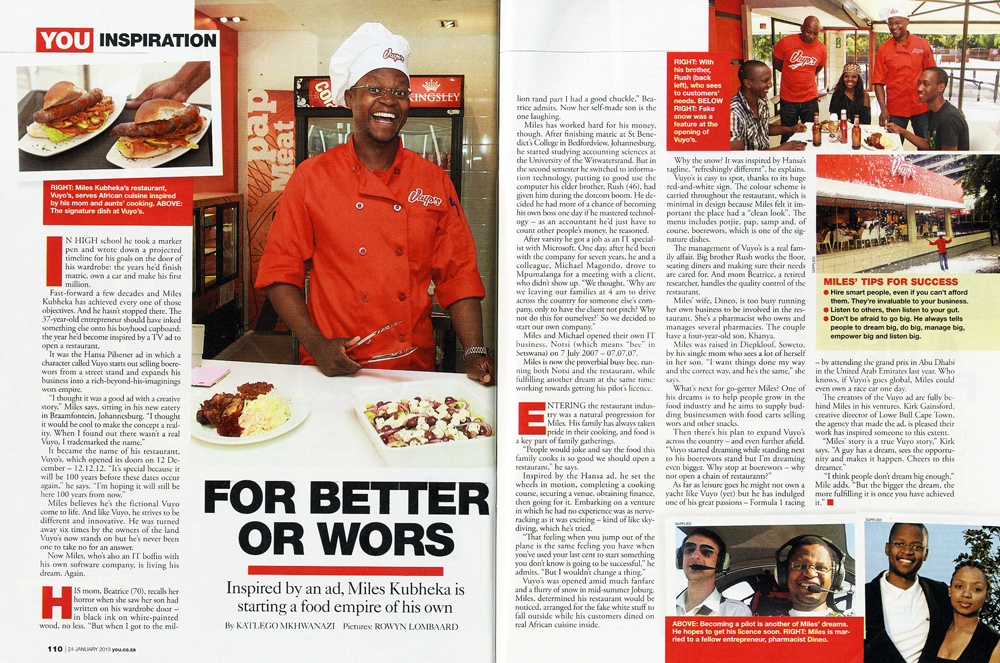