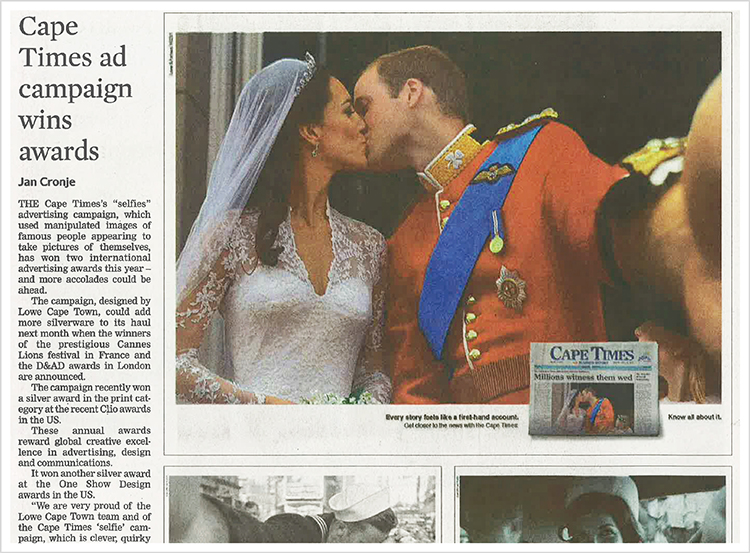 The Cape Time’s “selfies” advertising campaign, which used manipulated images of famous people appearing to take pictures of themselves, has won two international advertising awards this year – and more accolades could be ahead.

The campaign, designed by Low Cape Town, could add more silverware to its haul next month when the winners of the prestigious Cannes Lions festival in France and the D&AD awards in London are announced. The campaign recently won a silver award in the print category of the recent Clio awards in the US.

These annual awards reward global creative excellence in advertising, design and communications. It won another silver award at the One Show Design awards in the US. “We are very proud of the Lowe Cape Town team and of the Cape Times ‘selfie’ campaign, which is clever, quirky a nd intriguing. Lowe Cape Town has shown that creati9ve South Africans can take on the best in the world.” Said the executive editor of the Cape Times, Alide Dasnois.

The campaign ran from December to January in the Cape Times, and was also featured in The Big Issue and on posters in St George’s Mall. The print adverts showed icons, such as Jackie Kennedy and Winston Churchill extending their arms so that it appeared they were taking self-portraits or “selfies”. Below the pictures a short text read: “Every story feels like a first-hand account. Get closer to the news with the Cape Times.”

Kirk Gainsford, executive creative director of Lowe Cape Town, said the agency designed the campaign to emphasise the importance of accuracy in newspapers. “You could get a no more accurate account of an event that that of a ‘selfie’, “ he said. Gainsford said the campaign used simplicity to get its message across. “(In advertising the simpler you can go, the better the piece of work will be.”

Gainsford said the agency was now focused on the upcoming “big two” awards: The D&AD in London and the Cannes Lions in France. Winners of both awards will be announced next month. He said the number of different awards won by South African agencies this year showed how competitive the local industry was.