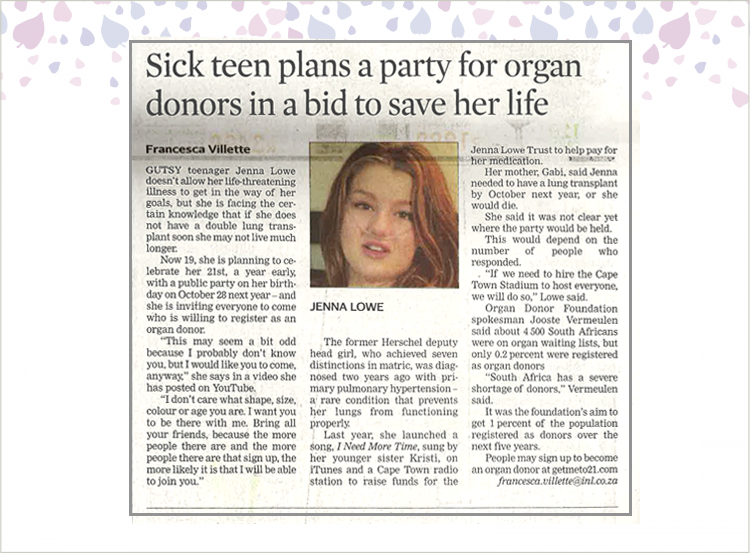 Gutsy teenager Jenna Lowe doesn’t allow her life-threatening illness to get in the way of her goals, but she is facing the certain knowledge that if she does not have a double lung transplant soon she may not live much longer. Now 19, she is planning to celebrate her 21st, a year early with a public party on her birthday on October 28 next year – and she is inviting everyone to come who is willing to register as an organ donor.

“This may be a bit odd because I probably don’t know you, but I would like you to come, anyway,” she says in a video she has posted on YouTube. “I don’t care what shape, size, colour or age you are. I want you to be there with me. Bring all your friends, because the more people there are and the more people there are that sign up, the more likely it that I will be able to join you.”

The former Herschel deputy head girl, who achieved seven distinctions in matric, was diagnosed two years ago with primary pulmonary hypertension – a rare condition that prevents her lungs from functioning properly. Last year she launched a song, I need More Time, sung by her younger sister Kristi, on iTunes and a Cape Town radio station to raise funds for the Jenna Lowe Trust to help pay for her medication.

Her mother, Gabi, said Jenna needed to have a lung transplant by October next year, or she would die. She said it was not clear yet where the party would be held. This would depend on the number of people who responded. “If we need to hire the Cape Town Stadium to host everyone, we will do so,” Lowe said. Organ Don ore Foundation spokesperson Jooste Vermeulen said about 4500 South Africans were on organ waiting lists, but only 0.2% were registered as organ donors. “South Africa has a severe shortage of donors,” Vermeulen said. It was the foundation’s aim to get 1% of the population registered as donors over the next five years.

People may sign up to become an organ donor at getmeto21.com