It’s a snap! More about our “Selfies” campaign for the Cape Times. 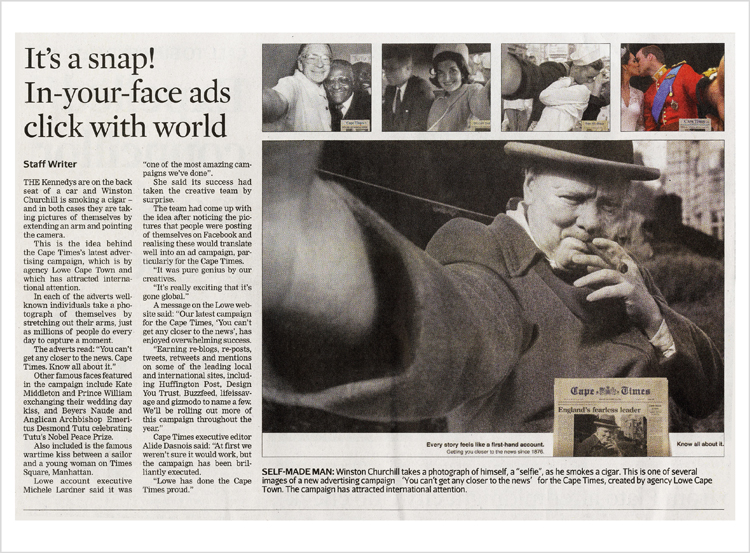 The Kennedys are on the back seat of a car and Winston Churchill is smoking a cigar – and in both cases they are taking pictures of themselves by extending an arm and pointing the camera. This is the idea behind the Cape Times’s latest advertising campaign, which is by agency Lowe Cape Town and which has attracted international attention.

In each of the adverts well-known individuals take a photograph of themselves by stretching out their arms, just as millions of people do every day to capture a moment. The adverts reads: “You can’t get any closer to the news. Cape Times. Know all about it.” Other famous faces featured in the campaign include Kate Middleton and Prince William exchanging their wedding day kiss, and Beyers Naude and Anglican Archbishop Emeritus Desmond Tutu celebrating Tutu’s Nobel Peace Prize. Also included is the famous wartime kiss between a sailor and a young woman on Times Square, Manhattan.

Lowe account executive Michele Lardner said it was “one of the most amazing campaigns we’ve done”. She said its success had taken the creative team by surprise. The team had come up with the idea after noticing the pictures that people were posting of themselves on Facebook and realising these would translate well into an ad campaign, particularly for the Cape Times. “It was pure genius by our creatives. “It’s really exciting that it’s gone global.” A message on the Lowe website said: “Our latest campaign for the Cape Times, ‘You can’t get any closer to the news’, has enjoyed overwhelming success. “Earning re-blogs, re-posts, tweets, re-tweets and mentions on some of the leading local and international sites, including Huffington Post, Desgin You Trust, Buzzfeed, Lifeissavage and Gizmodo to name a few. We’ll be rolling out more of this campaign throughout the year.”

Cape Times executive editor Alide Dasnois said: “At first we weren’t sure it would work, but the campaign has been brilliantly executed. “Lowe has done the Cape Times proud.” 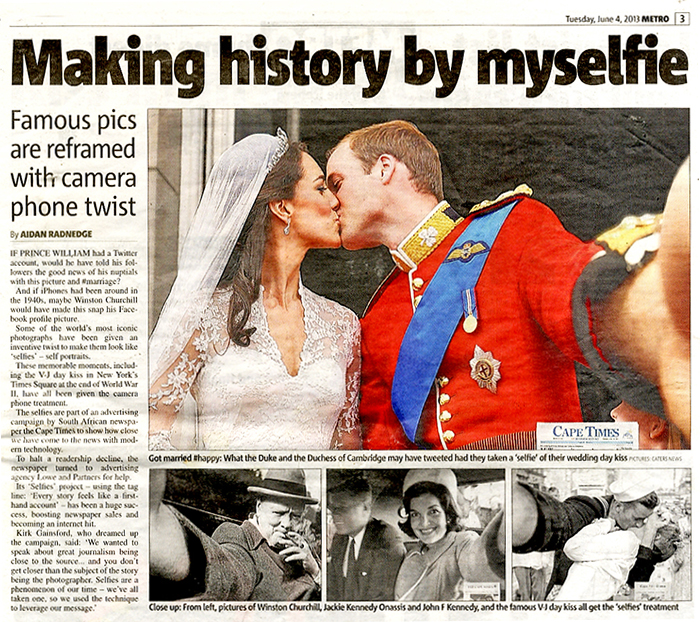